Odell Beckham Jr Girlfriend: Lauren Wood and Other Bizarre Dating History – All You Want to Know

Wide receiver for Cleveland Browns, Odell Beckham Jr. is nothing short of an alpha male. Given his exuberant, flamboyant nature paired with his Greek God-like muscular body, it comes as no surprise that he is always surrounded by beautiful women. His performance has been remarkable both on and off-field and has made the headlines quite a few times for the aforementioned.

From the start of his career, he has been caught hand in hand with some of the most prominent models and actresses in the industry. The 28 years old athlete has won many matches for his team and alongside that, many hearts.

Odell is currently in a relationship with the model and social media star, Lauren Wood, whom he started dating in the year 2019. However, before getting into this relationship, he has been associated with Amber Rose, Polyxeni Ferfeli, Bella Hadid, Khole Kardashian, and Zendaya. We will primarily focus on the wide receiver’s official relationship and towards the end, shine a light on his past associations with other women.

Lauren Wood is an American model, Instagram star, fitness enthusiast, and a very popular television personality who appeared on the MTV comedy show, Wild n’ out. She is often seen posting her workout routines and tips on Instagram. Even before her fame skyrocketed after she was found to be dating NFL star, Odell Beckham Jr, she had already amassed quite a huge following. Odell made it official with Lauren straight after celebrating his 27th birthday.

OBJ’s girlfriend, Lauren Wood was born on 13 March 1993 in Texas, United States. Lauren grew up along with her two sisters Ashley and Maleah Wood in her hometown. She was born to Reita Wood and embraces her African-American ethnicity with pride. There is no information about her father currently available.

Information about Lolo’s high school has not been mentioned anywhere, however, it is known that she attended Horry Georgetown Technical College.

How Did Odell Beckham Jr And Lauren Wood Meet?

Odell and Lauren first met and connected during the summer of 2019 when they were spotted exchanging flirty comments on their posts. The rumors finally started flying when the model was spotted attending OBJ’s game in the same season. Lolo was also seen taking photos with the athlete’s mother. Fans did not doubt that they were dating at this point.

The couple made their relationship official on the NFL star’s 27th birthday via Instagram posts and have been together ever since. OBJ shared three intimate photos of them including lying in bed together with a romantic caption declaring their love. 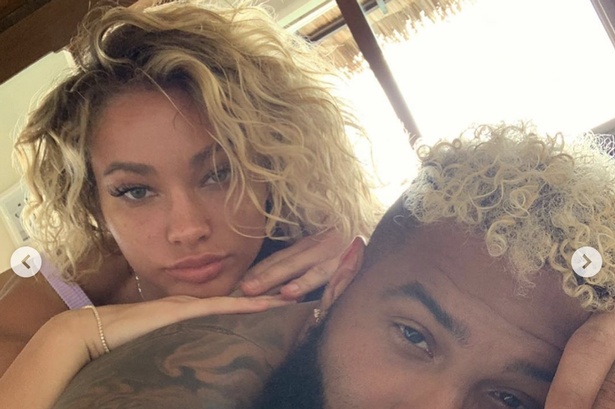 During the 2020 pandemic, the couple has quarantined together in Los Angeles and shared several videos from their pool and home gym. The lovebirds recently went on a vacation to Africa.

Furthermore, a question that haunts the fans right now, will Lauren get a ring from OBJ before he gets a super bowl ring?

With a massive follower count of 1.5 million on Instagram, it comes as no surprise that she endorses a lot of brands. Whether she got these endorsements after her connection with the NFL star is unclear, but she proudly endorses brands like Hot Miami Styles, Fashion Nova, and Pretty Little Things. These endorsements have defiantly earned her a hefty amount of money.

Lauren’s good fashion sense, engaging and informative content on top of her beautifully toned body helped her gain followers on Instagram very quickly. She started getting noticed more and more through her regularity on social media.

In 2015, she made her first TV appearance on the sixth and seventh season of the MTV improv comedy show “Wild N’ Out”. Appearing on that show and being voted as the favorite girl, she rose to fame fairly quickly, gaining hundreds of thousands of followers on Instagram. After she started dating OBJ, her Instagram account reached a whopping 1.5 million followers.

Currently, she is recognized as a model and an actress. Lolo also earns as a promising model and actress. All of these avenues combined, she has an estimated net worth of 800,000 US dollars. 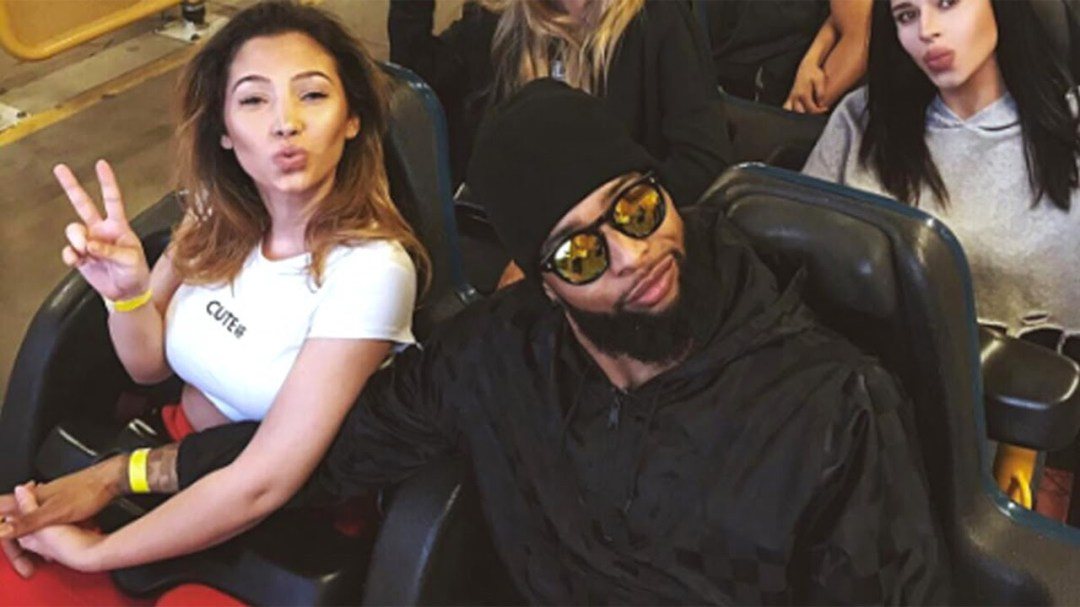 Polyxeni Ferfeli is a Greek Model famous on Instagram where she shows off her beautiful figure and perfect fashion sense. She even has her own business selling personalized clothing.

OBJ was first spotted with the Greek Instagram model, Polyxeni Ferfeli back in 2017 when they supposedly started dating. The couple was pictured at the six-flag magic mountain amusement park in California together for the first time. Later, they were also spotted at the beach of Cancun, Mexico. The couple shared a lot of posts on Instagram about each other but unfortunately, they split in 2017 for reasons not made public.

Additionally, in 2018 they seemed to be back together again. The model posted a series of Instagram stories wearing one of Beckham’s shoes. However, that was all. As anti-climactic as it sounds, the heat about their relationship quickly faded. 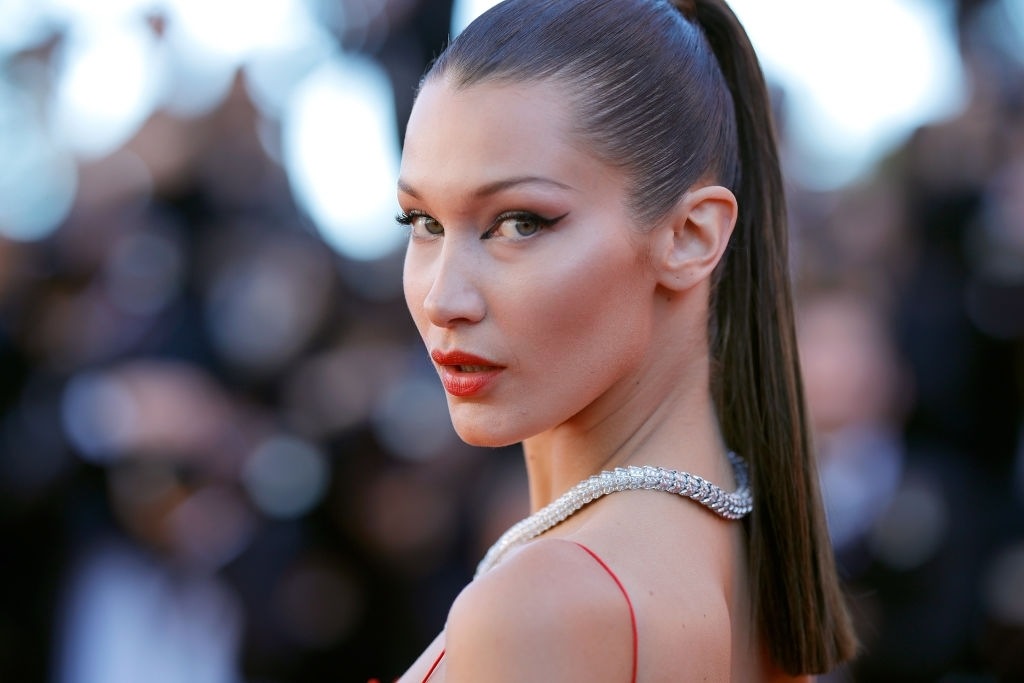 If you have ever searched the term modeling on Google, then chances are that you have heard about Bella Hadid. Isabella Khair Hadid, better known as Bella Hadid, is an American supermodel. In 2016 she was voted as the model of the year by industry professionals. In the same year, it was rumored that the wide receiver was dating her after they were seen together several times. Fans became surer of their relationship when the two started flirting with each other on Instagram. However, both of them got into separate relationships proving the rumors to be just rumors. 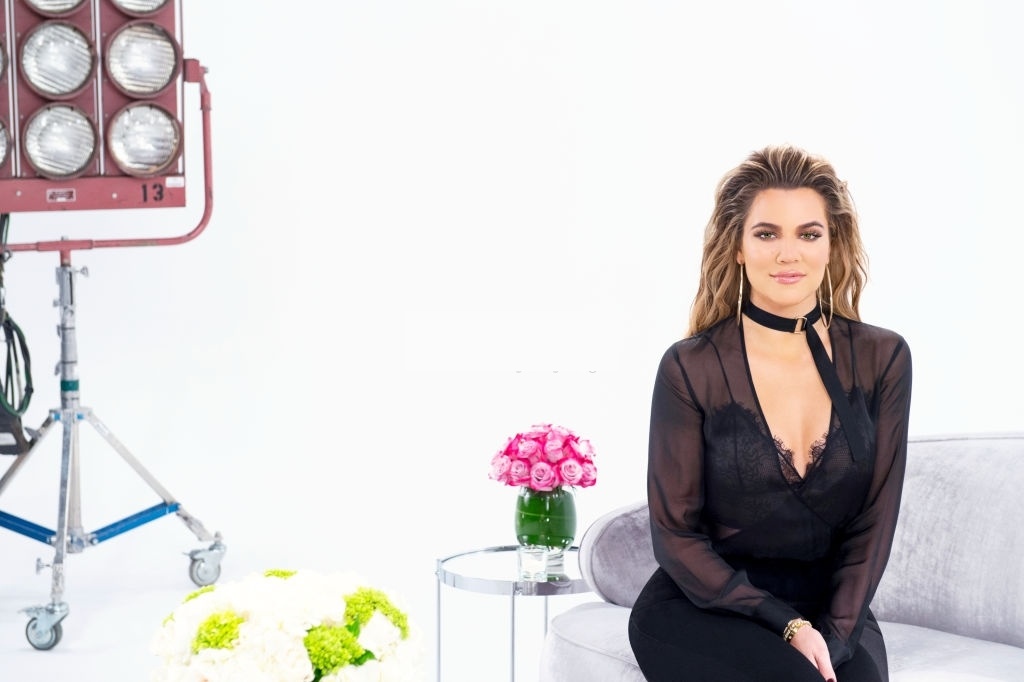 In the spring of 2016, Odell was spotted flirting and kissing with model and socialite, Khole Kardashian at a party. Within a day, pictures of them spread like wildfire and people started assuming that they were the latest celebrity couple. Before things could get worse, Khole took to Twitter and burst everyone’s bubble by letting people know, that was just the after-effect of a few drinks. The NFL star denied all rumors in an interview afterward claiming this was a major invasion of his privacy. 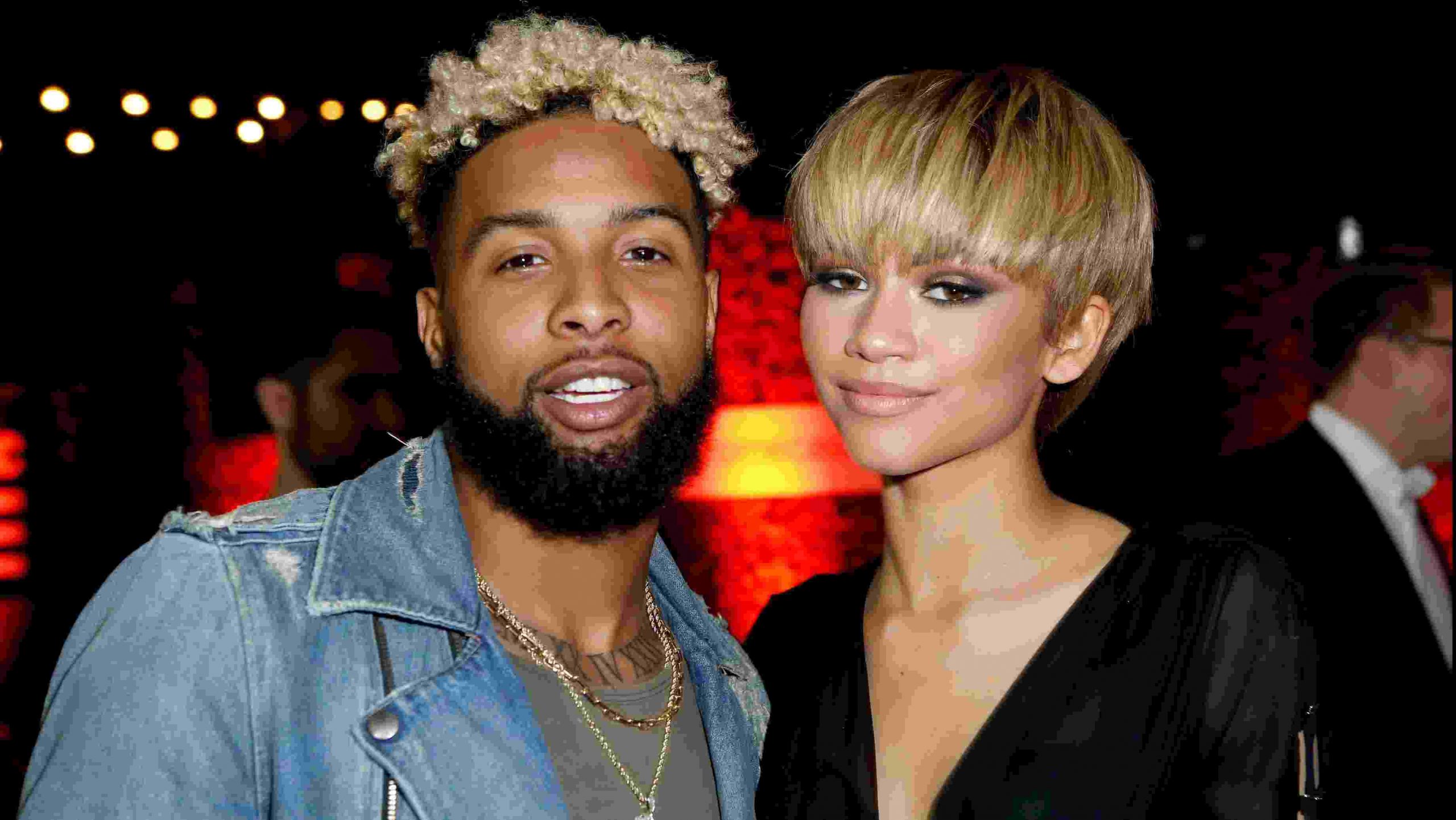 Rumors about the Hollywood actress dating Odell started when they were spotted watching an NBA game together and later escalated further when the two were caught spending a lot of time together at the Grammy after-party. The rumors were quickly shut off by the two claiming they were just friends. “That was just my homie,” Zendaya claimed. 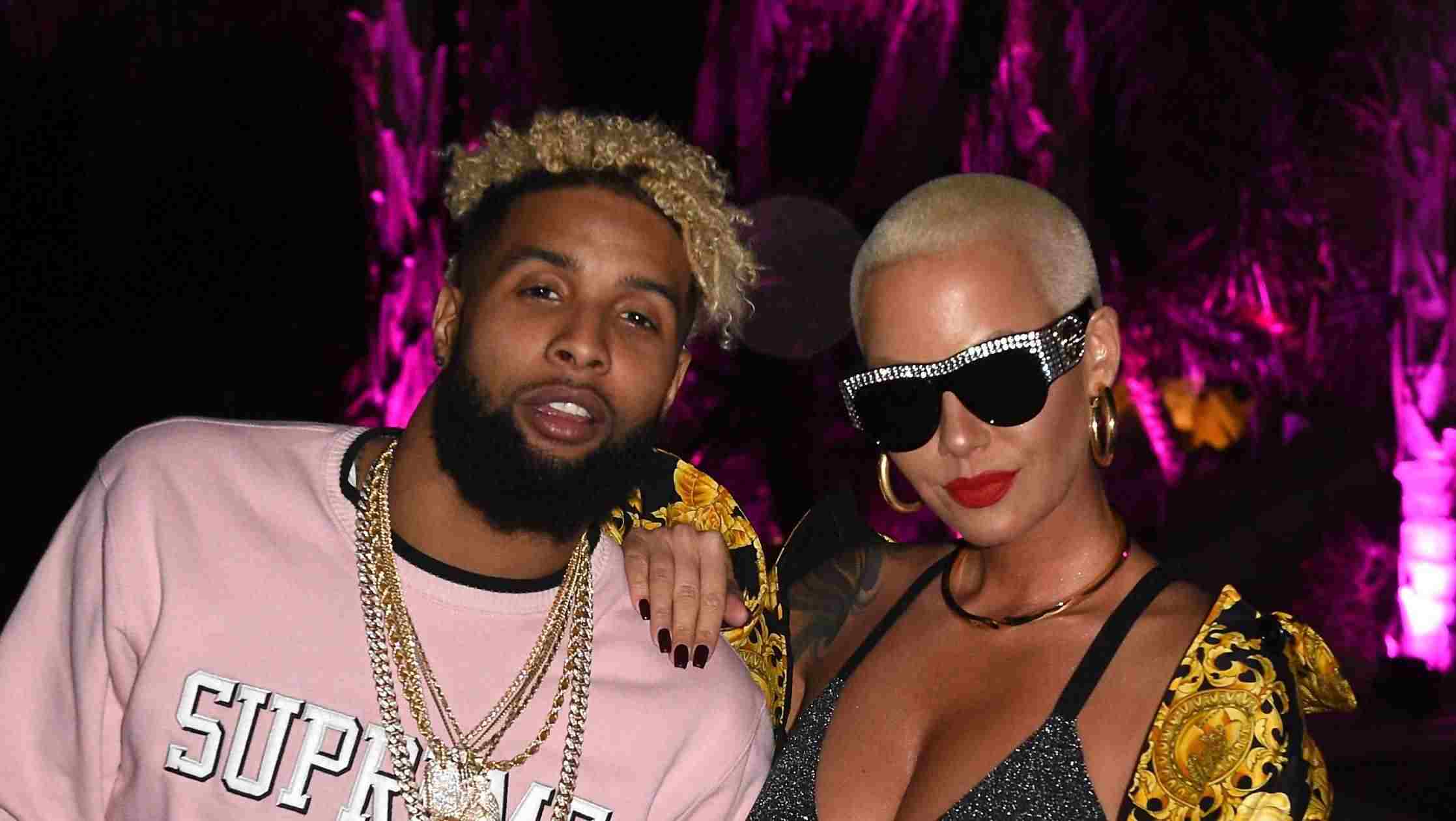 Although neither of them confirmed their relationship, OBJ and the American Model and actress Amber Rose were supposedly dating and in love for almost two years from 2015 through 2017. In an interview, Amber claimed that the wide receiver and she were just best friends and nothing more. The rumors started when they were spotted at Coachella riding a scooter together in 2015. 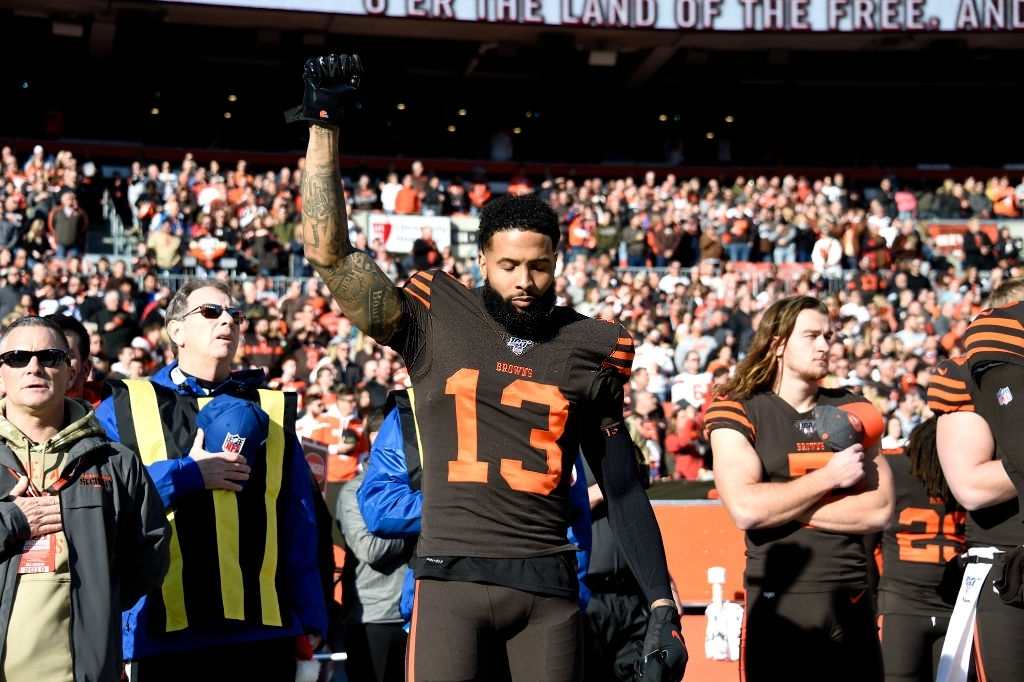 Odell Beckham Jr entered the NFL in 2014 with the New York Giants signing a four-year contract on May 19, 2014. The deal was worth 10.4 million US dollars. The NFL star concluded his impressive rookie campaign with 91 receptions, 1,305 yards, and 12 touchdowns in just 12 games.

In the 2018 season, after having played with the Giants for four seasons, Odell signed a 95 million US dollars contract extension with them.

Beckham was acquired by the Cleveland Browns in the next season and is currently their active wide receiver.