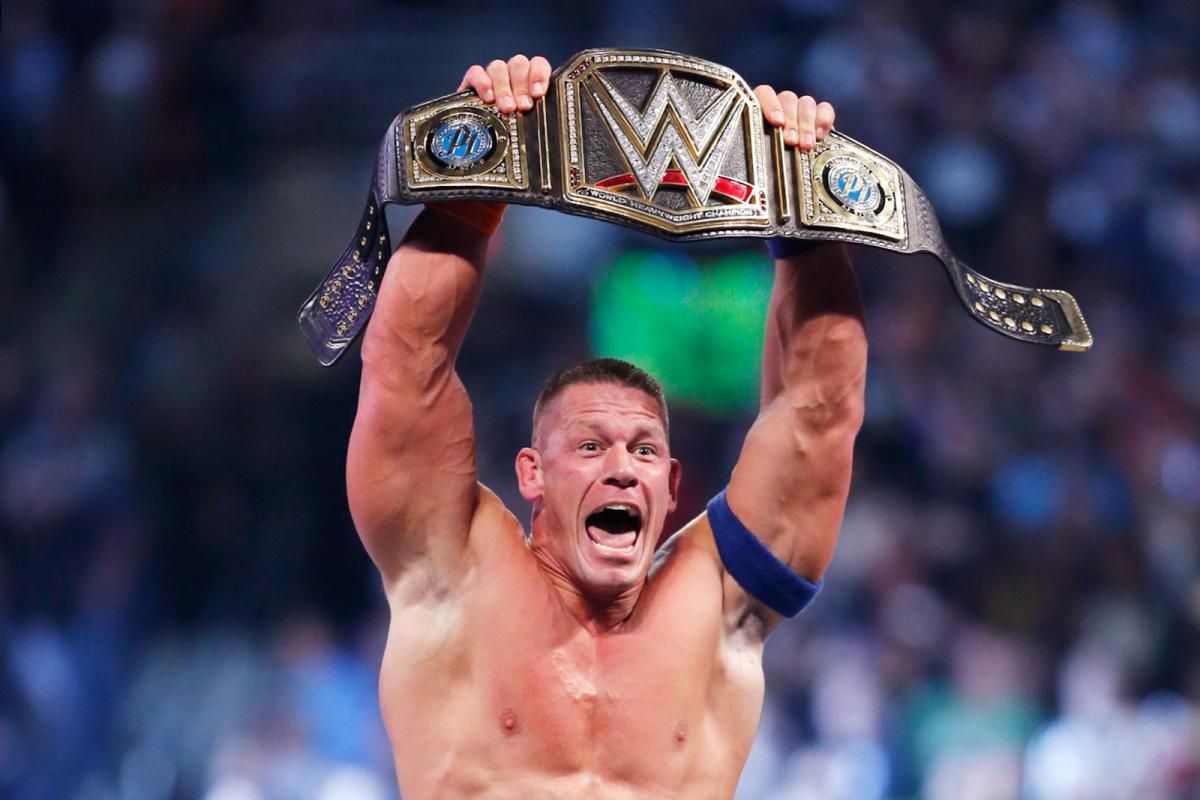 It is simple. The goal of every WWE wrestler out there is to go far in the company and become a famous figure; to capture many titles and to ink their names in the history books. As a matter of fact, nothing delights superstars as much as stepping up to claim the top title in the business – the WWE Championship.

Since the coveted title was created, we’ve witnessed many superstars go all the way to lay their hands on it. Given its prestige, these athletes were willing to go to any height to defend it and keep it with them. That resulted in many of the long title reigns we’ve witnessed in recent years.

Nevertheless, some couldn’t keep the iconic belt with them for long. These superstars lost the championship just a few weeks, days or even hours after they won it. Below we take a look at the top 10 of such superstars:

Despite spending some time away from the wrestling ring, Dave Batista still proved to us that he isn’t finished yet when he came back to face Triple H at Wrestlemania this year. He put in a great performance as he settled all the unfinished businesses he had with the King of Kings in the squared circle.

That brought to memory his past heroics in the company where he was one of the top guys during his peak days and was absolutely a nightmare to rival superstars. Batista held several titles; including the WWE Championship on several occasions. While most of his reigns were typically long, there was one that was very short and holds a place on this list as a result.

The Animal won the WWE Championship title after defeating Randy Orton at Extreme Rules on June 7, 2009, but was forced to vacate the title after just two days due to injury.

Kane might have found success in politics by becoming the Mayor of Knox County, Tennessee but that takes nothing away from the reputation he has carved for himself as a wrestler in the WWE ring.

As an elite superstar, The Big Red Machine Of Destruction, as he is popularly called has inked his name in the history books for his exploits inside the squared circle. One of them is being one of the superstars to have held the coveted WWE Championship title for the shortest duration in the history of the business.

At King of The Ring in 1998, Kane won the WWE Championship from Stone Cold Steve Austin but couldn’t keep it for long as the latter demanded a rematch and emerged triumphant just the second day.

However, Kane isn’t the only superstar that kept the title for just one day. ManKind and Bret Hart also have the same records to their names.

If you remember the ‘YES’ movement that stormed the WWE universe a couple of years ago, you will be familiar with this small but mighty wrestler. Daniel Bryan also made it to the list of superstars who held the WWE Championship belt for the shortest duration in history.

At Night Of Champions on September 15, 2013, Daniel Bryan edged out Randy Orton to win the WWE Championship for the second time in his career. While the fans were still celebrating his triumph, Tripple H, who is the Chief Operating Officer of the company stepped in to ruin the party.

The Game claimed that the winning pinfall was fast-counted by the official, forcing the American Dragon to vacate the title in just 22 hours and making it one of the shortest WWE Championship title reigns in the history of the company.​

We read above, how Triple H stepped in to deny Daniel Bryan his status as the WWE Champion and made the American Dragon’s reign one of the shortest ever recorded in the history of the company. Nevertheless, it is exciting to learn that The Game also has a similar experience in his bag.

Triple H’s effort helped him to capture the WWE Championship after he defeated Randy Orton to claim the title at No Mercy in 2007. On that same night, he defended the belt against Umaga and he was able to retain it; much to the excitement of the fans who watched in awe.

However, he would later lose it that night as Randy Orton revoked his power to rematch against him and came out on top in a Last Man Standing match that lasted for 20 minutes. All combined, The Game could only keep his status as the WWE Champions for just two hours.​

Mexican superstar, Rey Mysterio failed in his attempt to capture the WWE title from Brock Lesnar when the duo faced off in the ring at Survivor Series this year. Nevertheless, that takes nothing away from his records in the company as he has held the coveted championship before in his career. One of his reigns makes it to this list.

When CM Punk walked out of WWE and vacated his title in 2011, an opportunity opened for superstars to step up and pick up the gold. Rey Mysterio locked horns with The Miz and edged out the latter in a close contest to win the title for the first time.

However, his joy couldn’t last long as John Cena challenged him in the next hour and claimed the championship from him. His reign lasted for just an hour, entering the history books as one of the shortest WWE Championship reigns of all-time.

A familiar name sits at the fifth position on our list of the top 10 shortest WWE Championship title reigns of all-time. We read above how Randy Orton reclaimed the WWE title from Tripple H, courtesy of a rematch clause after The Game had won it against him and even defended it against Umaga.

But not many know what happened before that popular match took place. In the build-up to the duel, precisely six days ahead, John Cena was forced to vacate the WWE title due to injury and Vince McMahon awarded it to Randy Orton at No Mercy after six days.

The Viper lost the title there at the event to Triple H after just 22 minutes and 55 seconds. Although he later captured it back, history was already made as his reign entered into the list of the shortest WWE Championship reigns of all-time.

For the second time, this iconic superstar enters this list. Somehow, it seems the fact that Daniel Bryan is short plays into his game for giving him some of the shortest title reigns in WWE history. Don’t take it too seriously. That was just a satire. The superstar has enjoyed a tremendously successful career in the squared circle and he is without doubts, one of the big guys in the business at present.

Back to the subject matter, At SummerSlam on August 18, 2013, Daniel Bryan edged out John Cena to claim the WWE Championship. Triple H served as a special guest referee during the match.

Immediately the American Dragon captured the coveted title, Randy Orton came in from nowhere and hopped into the ring to cash-in his Money In The Bank briefcase. He subjected Bryan after just 4 minutes and 7 seconds; making it one of the shortest title reigns of all-time.

Appearing for the first time on this list, John Cena also has one of the shortest WWE Championship title reign records to his name. Many wrestling fans will remember this particular event; especially those who followed the world of sports entertainment vividly in the earlier phase of the current decade.

John Cena won the WWE Championship for the eighth time in his career at Elimination Chamber 2010 when he subdued Triple H to claim the title. However, Vince McMahon came in after the match and gave Batista a title shot.

The Animal threw his powerful Batista Bomb on Cena to knock him out and claim the title after just 3 minutes and 33 seconds following the earlier’s triumph.

Besides Mankind, Batista and Bret Hart, most of the superstars here on this list are still participating actively in the wrestling ring. Yokozuna is another non-active superstar that features on the list.

Yokozuna might have left the wrestling world for long but many will still remember his days in the squared circle. Especially because of his tremendous size that scared off many competitors. In the same vein, there are still a number of us who remember vividly that The Great Kokina owned one of the shortest WWE title reigns in history.

At Wrestlemania IX, Yokozuna defeated Bret Hart to win his first WWE Championship – courtesy of help from Mr. Fuji. Provoked by all the dirty tricks of Mr. Fuji, Hulk Hogan came in and subdued The Great Kokina to capture his fifth WWE Championship.

This is one man that is often spoken of in high regard in the wrestling world. In fact, there are many people who believe he is the greatest superstar to step into the ring due to his fantastic records. Andre the Giants holds the record for one of the longest title reigns in the business. On the same note though, he also has the record for the shortest WWE Championship reigns of all-time.

On February 5, 1988, the then WWE Champion, Hulk Hogan, lost his Championship to Andre the Giant. Following that, The Gentle Giant gave his title to Ted DiBiase and after a while, it was revealed that the official of the match was fraudulent. That resulted in Andre the Giant vacating his title which lasted in his hands for just a minute and 48 seconds.